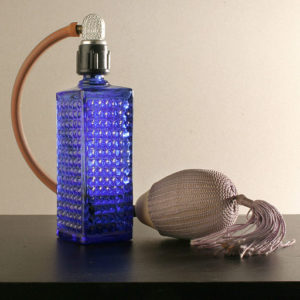 On a recent weekend afternoon, I was out for a jog on a stretch of 2-lane road.  With no shoulder or sidewalk to use, I was running against what little traffic there was.  From about 30 yards and traveling at about 45 mph, a car approached.  And it slowed as it began to brake.

The car was still a ways away when suddenly and out of nowhere, I was engulfed in a cloud of the most pungent perfume / cologne, causing a smelling salts reaction.

Once I was able to think and run straight again, I wondered, “Why the double-barreled assault?”  Why did I experience the perfume-cologne cloud bomb twice.

And then I remembered Mr. Armstrong and my 8th grade physics class.  Obviously, someone in the car had drenched him/herself with the smelly stuff.  Once travelling in the car, both the person and the perfume-cologne cloud had velocity and momentum.  When the car braked, the seat belt restrained our pungent passenger.  But there was no such seat belt to restrain the perfume-cologne cloud, which continued to travel, unrestrained, towards me.  Hence the first wave to hit.  Then when the car, with its partially rolled down windows, slowly passed me, I was overcome a second time and with greater intensity.  Thus explaining the double dose.

As I recovered my steps and continued the jog, it occurred to me that our leadership reputation is very much like the perfume-cologne cloud:  It arrives before we do.

As much as I like to think that my influence as a leader/manager/person is directly connected to me, it is in fact connected first to my reputation.  Before I interact with people, my reputation will precede me.  And when I say “reputation”, I don’t mean the “reputation” we used when we were in middle school.  I mean the reputation that is reliably and repeatedly confirmed by the history of my interactions with others.  Before I even open my mouth in a conversation, meeting, presentation, etc. the history of my interactions with others will have arrived well before me, and will have made an impact well before my physical arrival.

It would therefore serve me well to know what the sum of that history is, what my leadership reputation is.  Because whether I like it or not, it will precede me, and will affect my ability to connect with, collaborate with, and influence others.

Effective ways to mitigate this unique blind spot include 360 feedback assessments, as well as validated (with a strong emphasis on validated) personality assessments.  Both can help a leader know what his leadership reputation is, and moreover, help the leader enhance the “aroma” of her leadership presence.

As in my jogging incident, your boss, peers, and direct reports will get a double dose of your leadership reputation: once before you arrive when they anticipate you, and again after you arrive when they experience you.  Therefore, it’s best to ensure your leadership presence always smells great. So with that said, would yours pass the sniff test?